Tyson Fury vs. Tom Schwarz Live Stream, TV Schedule and Predictions. Tyson Fury is the man to beat in the heavyweight division, depending on who you ask. Though he doesn’t have a belt to his name, some boxing observers consider Fury (27-0-1, 19 KOs) the lineal heavyweight champion. He beat the previous undisputed champion Wladimir Klitschko in 2015, and he hasn’t lost since. 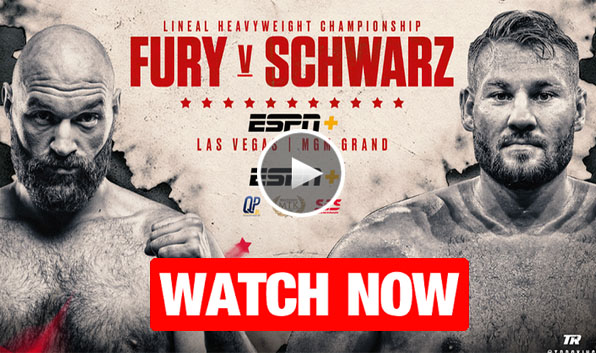 In fact, Fury hasn’t lost ever as a professional, and he will be looking to preserve his undefeated record and lineal champion status on Saturday night when he takes on the undefeated Tom Schwarz (24-0, 16 KOs) in Las Vegas.

Lineal is a murky concept. Fury beat Klitschko more than three years ago, but his life went into a tailspin that he only pulled out of last year.

In that time, Deontay Wilder continued his rise to prominence with a series of beatings, and Anthony Joshua clipped Klitschko himself to win three world titles and become one of the biggest stars on the planet.

The last few months have bolstered Fury’s claims that he’s the alpha in the heavyweight ranks. He fought Wilder to an incredible draw in December, becoming one of just two men to make it to the final bell against Wilder’s sledgehammer right hand (and doing it in instantly memorable fashion). Earlier in June, Joshua lost his belts in a stunning upset to Andy Ruiz Jr.

So Fury has a tenuous claim to the heavyweight throne; all he’s lacking is the hardware to prove it. The risks are bigger without the world titles, as a loss to the unbeaten Schwarz would be a huge blow to his drawing power. It’s not expected, but as Ruiz Jr. showed on Jun. 1, it’s not impossible.

Odds courtesy of OddsChecker.com and updated as of Thursday, Jun. 6 at 7 a.m. ET.

In the ring or outside of it, the 30-year-old Fury sets himself apart. Unlike many heavyweights, Fury likes to dance, bob his head, stick the jab and move around the ring. He can brawl and get dirty if he has to, but it’s not his preferred way to fight.

At 6’9″ with an 85-inch reach, Fury can look a little silly with his gangly limbs gyrating around the ring, at least until you realize his opponent is having trouble finding the target.

He’s even tougher to pin down outside of the ring. Fury has emerged from his mental health troubles of the past couple of years and seems to be trying to put some distance between his homophobic and bigoted remarks of the past.

Though his previous comments will still be unforgivable to many, he now espouses a much more positive worldview, and he can be disarming at times.

Just look at him at the last photoshoot before Saturday night, per BT Sport:

You would think he and Schwarz are starring in a buddy-cop movie. Instead, they are going to be fighting each other on Saturday night, with their unbeaten records on the line.

Perfect records are not made equal in this sport. Fury has won world titles, beaten the likes of Klitschko, Christian Hammer and Dereck Chisora (twice). He also largely outboxed Wilder in their draw and would have won it had he not suffered a second knockdown in the 12th round. He’s faced some excellent pros, though not many.

Schwarz, 25, hasn’t fought anyone of note. His bouts have come almost exclusively in his native Germany, save for two fights in the Czech Republic. He’s won and defended regional and inter-continental titles, proving he can hold his own against journeymen. The bout with Fury is a massive step up in competition, and an upset win would be a springboard to so much more.

Schwarz will have to rise to another level to beat Fury. At 6’5½”, he gives up plenty of size to the self-styled “Gypsy King.” Fury’s quick hands are that much more difficult to contend with if you need to stay in range to establish an attack.

Does Schwarz have what it takes? Not according to Bad Left Hook’s Scott Christ:

“But if you want to see what Schwarz has in the ring, there’s footage out there. Most damningly, his April 2018 DQ win over Senad Gashi shows a fighter who should be absolutely no problem for Fury, an ugly mess of a fight. There’s nothing you can find on Tom Schwarz that suggests he’s a challenge for Tyson Fury.”

Fury’s fights can be frustrating at times because his style proves so challenging to the heavies. Whatever cypher he chooses on Saturday night should prove difficult for Schwarz to crack.

There’s freedom to his boxing, when he’s in the right mindset. Or, as he told Yahoo Sports’ Kevin Iole, “I feel like a dolphin in the sea while I’m in that boxing ring. That is my home.”

So look for Fury to box and move, box and move, and eventually go all in on Schwarz. Showing some menace on Saturday night would be a good look as he sets a course for a rematch with Wilder, which could happen in early 2020.

Fury might squeeze in another fight in the interim, as Wilder is set to face Luis Ortiz in what could prove to be a tricky rematch bout.

If all goes according to plan for the Gypsy King, Fury will have a chance to market himself as a world champion again, and not just a lineal one.